Search
A brief history of the cruise control system in your car
Rosalie Wessel·Mar 30, 2022
Next post
The future of driving is electric, here's why
Automated driving

A brief history of the cruise control system in your car

Nowadays, pretty much every car comes with some form of cruise control. Invented in the early 1900s, cruise control became popular on luxury vehicles, but has since become a vital and incredibly useful piece of automotive tech. But what is it exactly? And how can it help you drive more safely?

Cruise control is a nifty setting that allows you, the driver, to set your vehicle to maintain a fixed speed. Unless you touch the accelerator or brake pedal, your car will keep on moving onward, at the exact speed you’ve chosen. Pretty handy, especially when you think about those long highway journeys that seemed fun when you planned them but are a lot less so after five hours of driving. In addition to saving your leg from horrendous cramping, it reduces cognitive fatigue and increases fuel efficiency.

The first version of cruise control appeared in the early 1900s, in a Wilson-Pilcher car. The driver was able to set the chosen speed using a lever on the steering column. What we’d consider modern cruise control came about in the late 1940s, invented by a man named Ralph Teetor. Teetor, who was completely blind, was one of the foremost automotive engineers of his generation. His invention, first called ‘Speedostat’, was introduced in a Chrysler car as a luxury option. Its surge in popularity led the brand to install a ‘Speedostat’ it in all its vehicles. It was officially christened ‘cruise control’ by General Motors when it began using it in its Cadillac vehicles.

Modern cruise control systems began to emerge in the 1990s, with manufacturers incorporating more advanced digital technology into the design. Other systems such as LiDAR, radar, sonar and camera-based solutions were soon added, increasing the car’s ability to sense oncoming traffic, which in turn helped the vehicle to determine speed and avoid potential accidents.

Modern cruise control began to emerge in the 1990s, with advanced digital technology incorporated into the design.

How does it work?

By actively adjusting the car’s throttle, cruise control works to maintain the speed of the car without needing the driver to do anything. In mechanical setups, the system activates the throttle valve with a cable connected to an actuator, which ensures the engine generates enough power to maintain its current speed. However, in newer cars, that use a drive-by-wire throttle body, cruise control is completely electronic. This results in a more predicative system, whereby it can slow down or speed up depending on what the target speed is. It also allows the driver to increase or decrease their speed, usually using buttons on the steering wheel.

The driver, of course, can decide when to use cruise control. They are also in charge of what speed the car will cruise at. After turning the system on, the driver then must set the speed. In some cars, the system will cruise at the current speed, in others it might need to be set. To deactivate the system, the driver must simply press the brake or clutch pedal or cancel it using a button that usually found on the steering wheel.

There are a many different types of adaptive cruise control – radar-based systems, laser-based systems, binocular computer vision systems, assisting systems, multi-sensor systems and predictive systems. The first two are self-explanatory – using radar and laser systems to detect the vehicles surroundings, as opposed to binocular computer vision which uses cameras in the vehicle’s rearview mirror. Other versions, such as assisting systems, can be bought separately to enhance the safety features that the car already has. Predictive systems use data in order to predict the movement of other vehicles.

The type of cruise control fitted varies from vehicle to vehicle, so it pays to know what type of system your car has so you can understand its capabilities. There are limitations, both with adaptive cruise control and conventional cruise control. The driver must still pay attention at all times and not let their awareness drift. Weather conditions such as snow, rain or fog could also confuse the sensors and adversely affect the adaptive cruise control system.

Weather conditions such as snow, rain or fog could confuse the sensors and affect the adaptive cruise control system.

Cruise controls is usually packaged as part of the vehicle’s advanced driver-assistance system (ADAS). ADAS, while not autonomous, is constantly evolving to bring drivers new and more powerful safety features. However, Level 2 ADAS systems are viewed by some as the next step towards autonomous vehicles, with technology such as adaptive cruise control playing a core role in their argument. The problem with this though, is that partial automation (AKA cruise control) in cars has led some drivers to grow confused as to how far their vehicle’s autonomy extends, which is a dangerous combination. Recently, Tesla ran into trouble with its customers regarding complaints over cruise control deteriorating over time. The ‘phantom-breaking’ drivers experienced, where the EV would break suddenly and without warning, would almost cause the cars to be rear-ended. Adaptive cruise control, while having evolved exponentially and providing a service that benefits safety on the road, is still not a failsafe for a fully attentive driver and it certainly has a long way to go before becoming fully autonomous.

It also begs the question whether cruise control can be seen as potentially misleading. The false sense of security that drivers experience, thinking that their car is keeping their speed under control or – as with Tesla drivers – is completely autonomous, can lead to distracted driving. Cars do have systems in place to prevent distractions like drowsiness, but lack of attention due to a misguided belief that the vehicle will prevent any potential accidents is not one of them.

When used correctly, though, cruise control can help make driving safer and less fatiguing. But it still begs the question, is it only a matter of time before cruise control systems will be completely autonomous? That remains to be seen. But for now, take comfort in the fact that your car has an extra eye on the road, accompanying you on those tiresome and long drives. automated driving
What are driver drowsiness detection systems and how do they work?
Many people face long nights at work. Truck drivers, security guards, healthcare professionals. Jobs that are fundamental to society and to the health, wellbeing and comfort of the general population. As a result, getting behind the wheel while feeling tired is not uncommon. It’s something most drivers have probably done. It can be incredibly dangerous, unless we find a way to warn drivers when their tiredness has become too severe and is impairing their driving.
Feb 23, 2022·4 mins read 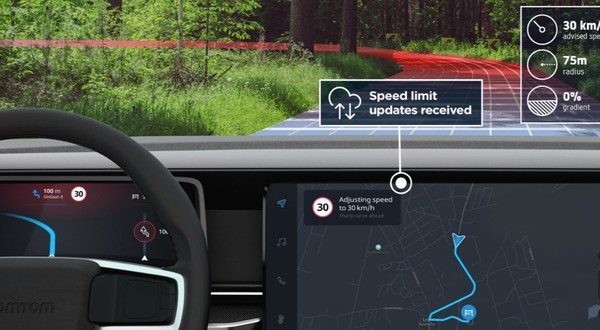 automated driving
Intelligent speed assistance systems are coming, next we need drivers to use them
In just one year we’ll have new European legislation that requires carmakers to fit technology to their vehicles that warns drivers if they’re breaking the speed limit. The technology, called ISA (Intelligent Speed Assistance), will even prevent drivers from exceeding the speed limit. But that’ll only happen if drivers choose to use the tech.
Jul 09, 2021·3 mins read automated driving
What is adaptive cruise control and how does it work?
Adaptive cruise control (ACC) is an active safety system that automatically controls the acceleration and braking of a vehicle. It is activated through a button on the steering wheel and cancelled by driver’s braking and/or another button.
Nov 28, 2019·8 mins read
Never miss a story
Get the latest news from TomTom in your inbox.